The New Year is almost here. Traditions are a great way to celebrate the end of one period and the beginning of another. From spending time with family and friends to partying, there are many traditions for celebrating the coming of the New Year. And New Year food traditions are no exception.

Most cultures have food traditions and special meals that they serve on New Year’s Eve to ensure health, luck, happiness, and prosperity in the coming year. Looking to start the coming year on the right foot? Usher in the New Year with these lucky foods to bring prosperity and good health.

Around the world, food is a common way to welcome the New Year. In many countries, people believe eating certain foods can considerably influence the following year’s outlook. We explored American foods traditionally served on New Year’s Eve and what they typically stand for. 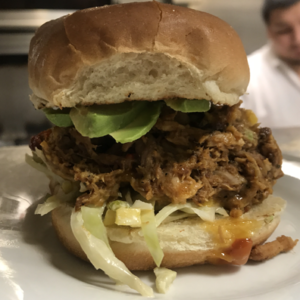 Pork is a popular traditional American food served on New Year’s Eve. German immigrants introduced this food tradition into the United States in the 18th century. Most Americans, especially those in the southern parts, eat pork to celebrate the coming year.

Pork is believed to bring prosperity and progress when eaten during New Year’s Day. This tradition is rooted in the habit of pigs, who root for food when looking forward. Great ideas for serving pork on New Year’s Eve are ham hocks, sausages, pig’s knuckles, or stuffed pig’s trotters. You can also enjoy it with a dish of dried beans. Unlike other cuts of meat, pork is fattier, making it a tasty and flavorful New Year’s Eve food.

At NY Firehouse Grille, pork is the main ingredient in many appetizers, entrees, and side dishes.

Cornbread is a favorite New Year’s Eve food tradition for most Americans, especially southerners. This New Year’s treat symbolizes wealth because cornbread slices look like gold bars. Serve cornbread with greens and black-eyed peas to triple your luck and make a fortune in the coming year. You can also toss in some extra corn kernels for deeper pockets in the New Year.

Black-eyed peas are an ingredient in a popular American dish called Hoppin’ John. The dish includes a mixture of rice, pork, and black-eyed peas with a side of cornbread. Most legends believe eating them with greens, cornbread, and pork ensures the luck stays throughout the year.

If you want a sweet snack for New Year Eve, you can’t go wrong with a special soft pretzel meal. This New Year food tradition is German- American in origin and dates back to the 20th century in Ohio. Eat pretzels to bring good luck into the New Year. Punctuate your pretzel platter with candied fruit and nuts for extra luck in the coming year. 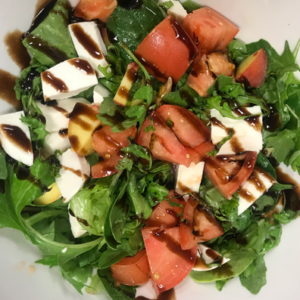 Greens are another popular food that Americans traditionally eat on New Year’s Eve. Green leafy veggies resemble paper cash due to their green color and appearance. Hence eating greens on New Year’s Day will ensure increased wealth in the coming year. And the more you eat, the more prosperous and healthier you’ll be in the New Year.

Greens to eat on New Year’s can include collard greens, kale, mustard greens, chard, spinach, turnip greens, and even sauerkraut or boiled cabbage. Collard greens are the easiest to find in the winter months.

Start your year off on a healthy note with one of the salad offerings at NY Firehouse Grille. With six great salad choices including Buffalo Chicken Salad, Cobb Salad, and Station House Salad, you are sure to find something you like.

Like greens, beans signify money, more specifically coins. Eating a bean dish on New Year’s Eve will ensure wealth in the coming year. Your dish can include chickpeas, black beans, green beans, Cannellini beans, or garbanzo beans. Beans with bacon and rice are a favorite in the American South for an extra lucky New Year’s Eve dish.

You can also enjoy your beans in a Big Steak Burrito dish which includes a mixture of rice and beans, marinated steak, lettuce, and cheddar cheese stuffed in a large grilled burrito.

Eating grapes on New Year’s is a famous New Year food tradition with Spanish and Portuguese origins. These communities have ushered in the new year by eating 12 grapes just before midnight for many years.

The practice requires eating one grape for every chime at midnight. Eating twelve grapes on New Year’s Eve is believed to bring you luck for all the twelve months of the following year. This year, be sure to have grapes in your New Year’s food for a lucky next year.

Another kind of fruit eaten at the New Year includes pomegranates that signify fertility and birth. 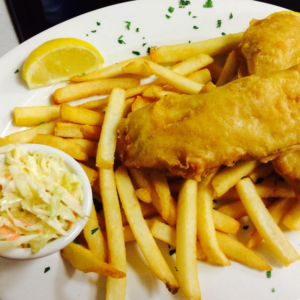 Fish for New Year’s is another favorite dish that symbolizes long life, fertility, and bounty. For instance, Scandinavian, German, and Polish communities consider herring a symbol of good fortune. So, eating fish on New Year’s Day can ensure good luck and abundance in the coming year. It also makes an excellent appetizer for your New Year’s feast.

New Year food traditions are an excellent way to celebrate the end of the old year and welcome the coming year. Prepare and serve the above-listed foods on New Year’s Eve and start the New Year off with luck and prosperity.

Not sure where to begin or don’t have the time to prepare these elegant New Year foods? Don’t worry. At NY Firehouse Grille, we’ve got your New Year’s Eve menu covered, from breakfast to dessert. Contact us at (914) 788-0808 and tell us what lucky dish you want for your New Year’s feast. Or order online and have your food delivered to your doorstep.

Join Our Email List!
Find out about al lof our specials, contests and Firehouse events!

We open daily at 11am