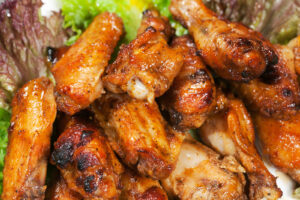 There are different ways to cook wings, but which of these is best? Is it an Oven-Baked Wing with BBQ Sauce or a Fried Chicken Wing?

The answer is, there’s no wrong way to do it!

Chicken wings are delicious and popular party food, but you might not want to indulge in them if the gridlock on your evening commute has already knocked out all hope for getting home before it’s game time.

Luckily there’s no need for an emergency dinner because we have five easy recipes that will transform those pesky dreaded poultry parts into mouth-watering irresistible snacks.

So without further ado, let’s take a deep dive and explore the five easy ways to get you ready for the next super bowl.

Planning a big dinner party? The best way to get everything done is with this simple, ready-in-no-time recipe. Simmering wings in sauce produce tender, fall-off bone meat with an addictive flavor that everyone will love! However,  you need to put together your favorite flavors beforehand, so it’s an easy dish when served on game day or any other occasion where food demands attention.

Why slave over a hot stove when you don’t have to? Let this “set-it and forget chicken wing recipe” do most of the work for you. The best part is, they’re super easy; simply simmer them until done, then remove from heat before adding any other ingredients like butter or honey mustard sauce (a total game-changer).

Next, add 3 pounds of chicken wings to a slow cooker. Pour the sauce mixture on top and gently toss them around for about 10 minutes to coat each piece well with an awesome flavor that will have your guests coming back again! Cover it up until it’s ready.

This method of cooking yields the most healthy result, as the fat melts off during boiling. To make them, you’ll need to bring a large pot of water to boil and leave for 15 minutes before removing the wing with a slotted spoon.

Simply combine two tablespoons of butter and a few dashes of hot sauce in a small bowl, shake them together until smooth, then brush it over the cooked crispy wing after removing it from the oven or broiler pan! You can’t go wrong when it comes to these spicy delights, so give ’em a try today

Tips to Boil and Broil

Sometimes, you just need to go all-in and fry up some wings for the big game. Here’s how it goes!

Heat 1 inch of vegetable or peanut oil over high heat until it’s 375 degrees Fahrenheit. Next, mix one cup flour with one tablespoon paprika in a shallow dish so they are well coated on both sides of the wings. In addition, satisfied consumers’ palates by frying up all those crispy goodness into some delicious bites! Add two tablespoons of honey alongside 1 ½ cups Frank’s Red Hot sauce.

Do you love wings? If so, then this recipe is sure to please! To make them start by cutting 1½ pounds of wings into halves through the joint, place them in a bowl with olive oil and seafood seasoning.

Grill uncovered for 15-20 minutes until cooked; turn once during the cooking process. Add three tablespoons of melted butter and another teaspoon of seafood salt mixture into the bowl before tossing all ingredients. Afterward, grill properly and serve immediately!

Baked sweet and spicy wings are a delicious option for your next dinner party. First, preheat the oven to 425 degrees Fahrenheit (218 Celsius). Then add 4 pounds of chicken wings into two tablespoons canola oil along with one teaspoon salt, then ½ teaspoon pepper in a bow. Allow it to bake for 35- 40 minutes until it is cooked and crispy.

Join Our Email List!
Find out about all of our specials, contests and Firehouse events!

We open daily at 11am